Super Mod
#121
Ah I see I was wondering if this was the only one or if players could find more. That's pretty cool, I thought it was only settlements and outposts etc.

Hardcore
#122
Laursen said:
View attachment 2551
Click to expand...
When I saw that picture, I was expecting this to be the next picture XD

Core
#123
Shilka said:
When I saw that picture, I was expecting this to be the next picture XD


Now I'll see the thing in a different light
L

Core
#124
little P said:
Ah I see I was wondering if this was the only one or if players could find more. That's pretty cool, I thought it was only settlements and outposts etc.
Click to expand...
Only FD knows what's actually out there, but personally I doubt there is much more then ship wrecks and barnacles out there .....yet

As for how many Of each? I'm sure there will be tons...the ship wrecks I'm sure that at least will both have anacondas and t9s since both where shown in prerelease videos..... But they are hard to find beyond belief. Took people 1 1/2 month or so of playing to find the first one. As of now they don't show up on scanners or poi only its cargo does. So each planet with a wreck is like finding a speck of sand in a desert.( each planet area is HUGE) But there are billions upon billions of planets.

The barnacles (alien buildings) does show on on wave scanner and poi and as far as I'm aware there are both static and non static versions of it. According to Michael Brooks they are most likely to be found in nebulas and especially the seven sisters (which is where the first one was found). Still like looking for a needle in a haystack this game is massive beyond understanding.
Barnacles seems to be next step in the ongoing alien "story" line where the unknown Artifact was the first.

Core
#126
Great screens of the barnacles!

It's official: I play this game too much. 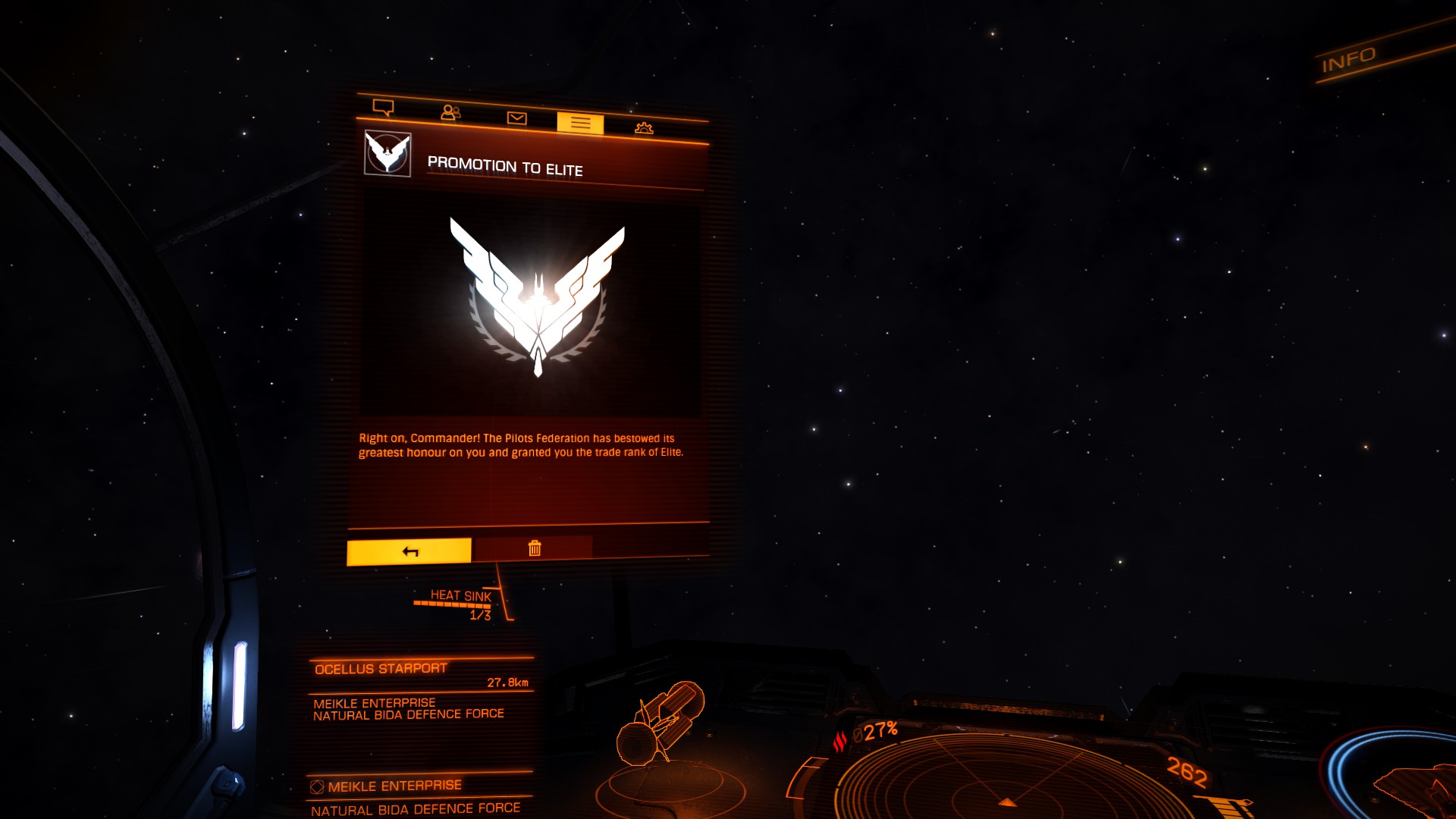 Super Mod
#128
Congrats Ninj How much does it take to get to Elite? Nice one
N

Elite Trader is just over a billion credits. I grinded with trader vessels all the way up to tycoon (around 400 mil credits) - started with a t6 and worked my way up to t7 then a t9.

After which I found smuggling. The risk is higher, it's a lonely way of making money - but the rewards have been tasty!
L

Core
#131
Since Horizons they made it much harder. No fines for failing your mission but if you get scanned you lose the smuggling mission(s). The risks and the rewards are greater than before
J

A land able planet 6 ls from the star.

Core
#135
Sunbathing at its best
L

Core
#136
This is NOT my own Picture, but found it on forums and is without doubt the prettiest Picture I have yet seen from Elite Dangerous (Horizons or not). 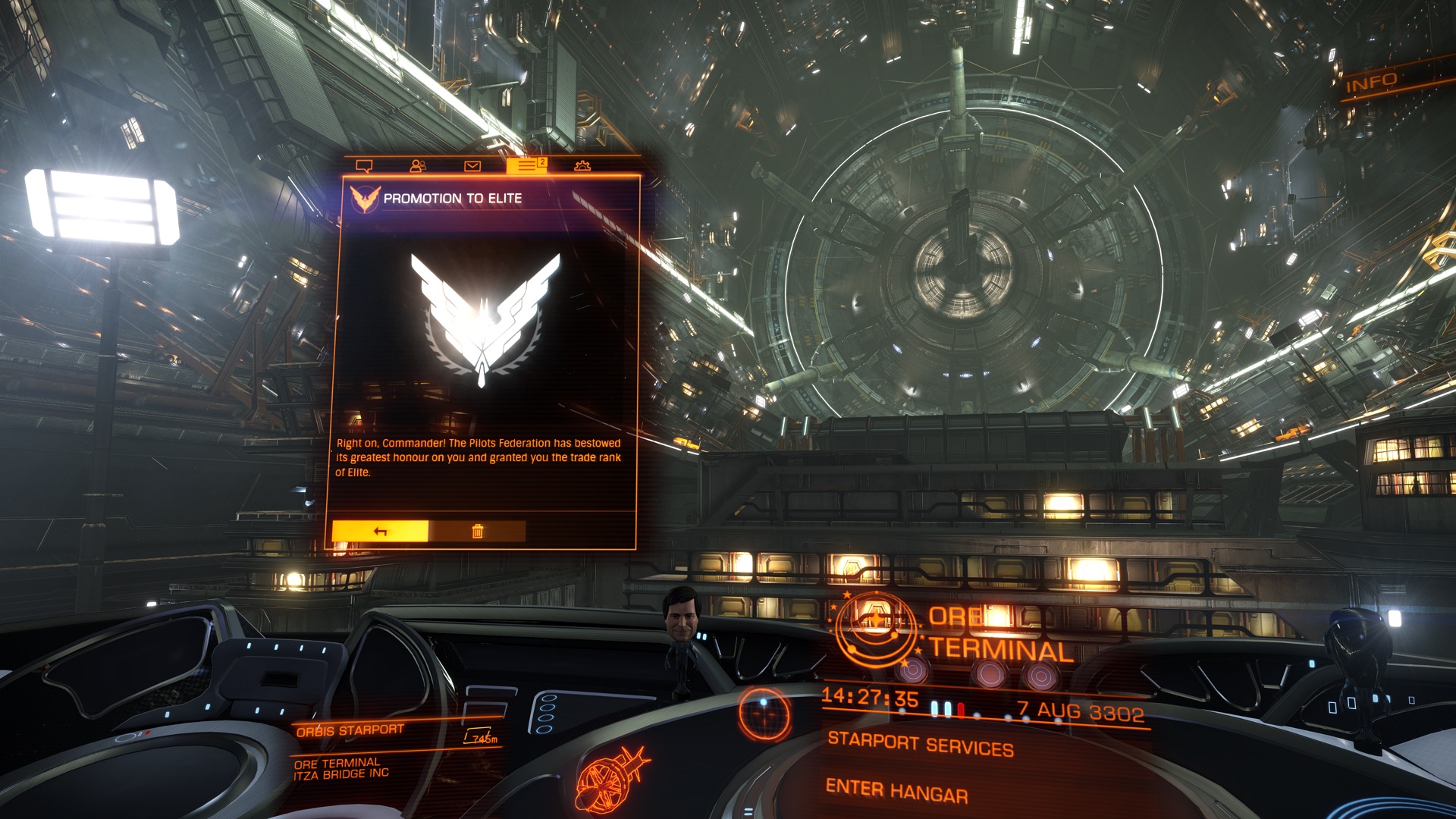 Super Mod
#138
I made it back to our solar system in one piece and went for a visit back to Earth. I intend to embark on a new adventure as if I was leaving Earth for the first time out into the unknown, I thought that would fit in with my current situation of knowing how to fly etc. but not knowing exactly what's out there in space since all the new updates

Moderator
#139
you can now wear shoes and a jacket and trousers over your skin suit in ED !

Staff member
Site Admin
#140
Ya but can you walk around in your underwear?