Super Mod
#61
Interesting read on the overclocking process you embarked upon Brainling. Fantastic numbers too. It's a beast of a card that's for sure! Congrats

Can it run Crysis though? 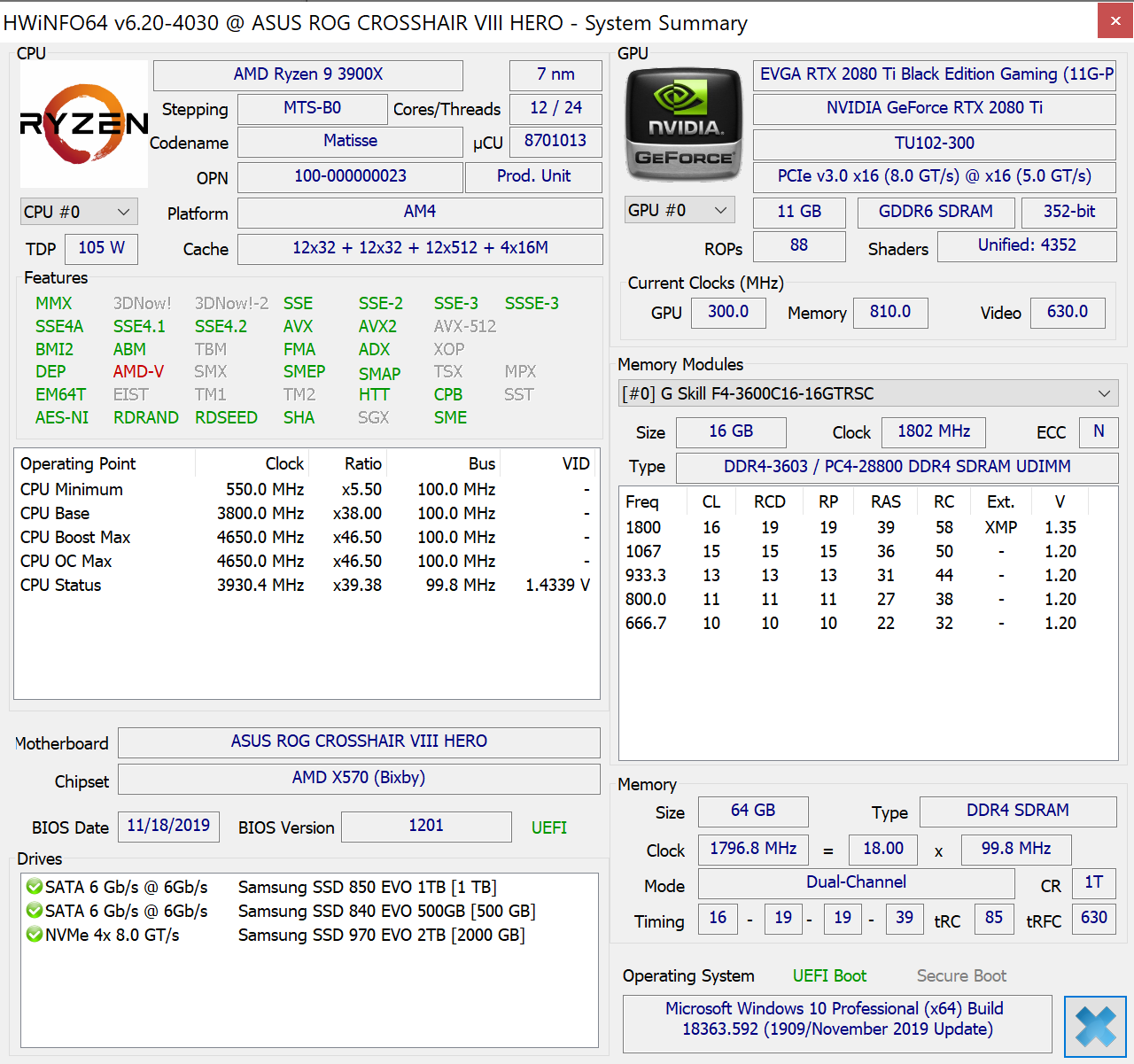 From an individual core/gaming point of view it was a straight side grade from my i7-8700K. The 8700K is still a monster chip, especially if you all you do is game. My primary PC is used for more than pure gaming. Even in the realm of gaming, I run a lot of utilities for racing and flight siming that all put stress on the CPU in some way or another.

So that said I didn't expect to see benchmark score jumps, but I actually saw decent gains. Around 1600 points on average in Time Spy.

But here's where it really shines: 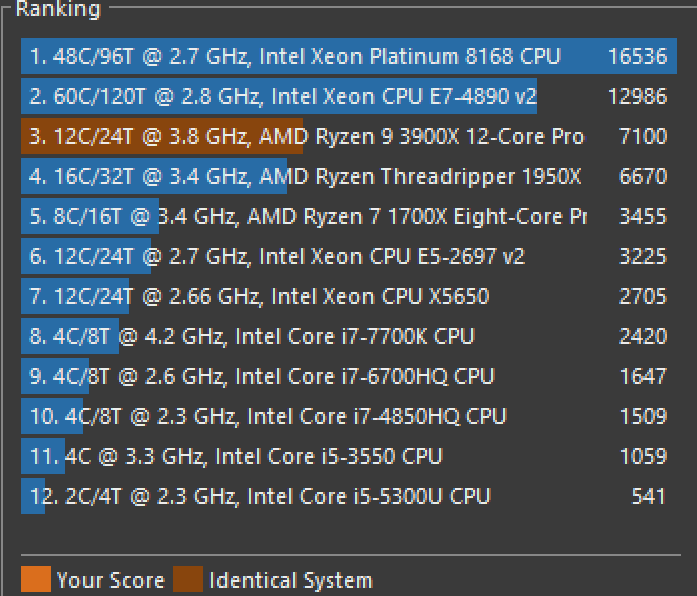 That's a Cinebench R20 run I made. 7100 on a consumer CPU is bonkers. Look what it's throwing punches with. Threadripper, Xeon, etc. It handily beats the Threadripper 1950X that has four more cores.

AMD really has something going right now. This CPU is a amazing. It's blow for blow as fast as my 8700K in gaming, it's faster in any game that takes advantage of core count (and there are a lot that do now, and the number is growing). It's a monster at any of the work station tasks I do like compiling code. My general system responsiveness and snappiness is way up. 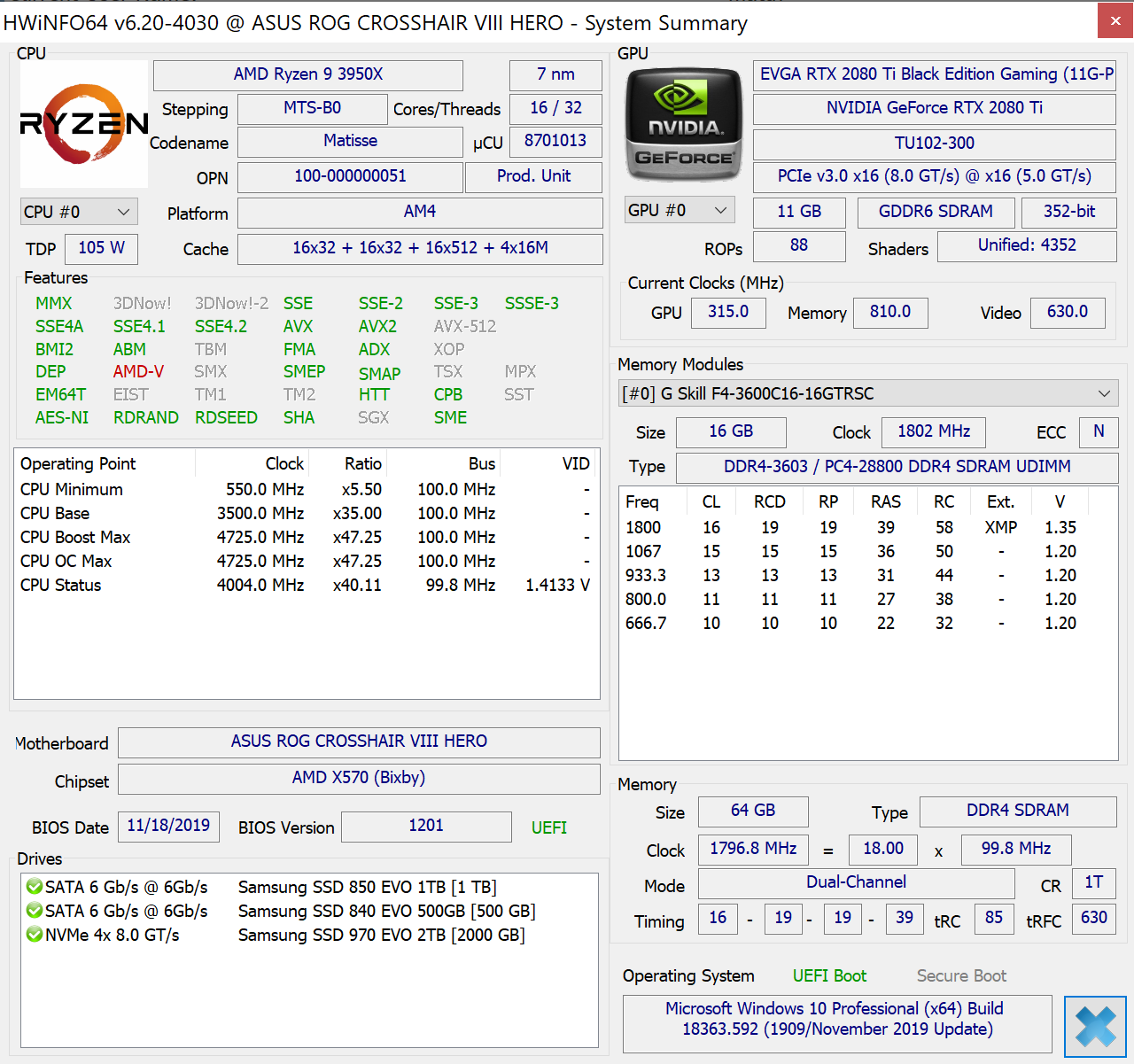 Gaming benchmarks didn't change at all, but my score in Cinebench skyrocketed as one would expect.

It's not quite exactly 25% better because almost nothing scales purely linearly with cores and the all core clock speed on the 3590X is a touch lower than the 3900X. The single core boost clock is higher on the 3950X though as it's a better binned chip.

Gaming benchmarks didn't move at all from the 3900X (though they are still higher than my 8700K by a non-insignificant margin):

Overall it's a monster of a CPU. I'm likely set at CPU for several years with the 3950X. Unless something leaps and bounds faster comes around, I'll likely use this CPU for a long time.

Core
#64
How are the temps on these new chips Brainling? Still warmer than the Intels or not that bad?

Hardcore
#65
Warmer on the low end, cooler on the high end. They are supposed to be that way though, they run more like GPU's than CPU's in terms of how they manage thermals. My 3950X idles around 40C, but never exceeds about 75C under max load.

For reference my 8700K idled around 27C but could easily go to 85C under max load. In both cases I've used a 240mm AIO. So liquid, but not monstrously crazy liquid.

The temperature ranges and behaviors of the Ryzen chips and what we're used to from Intel chips from the last decade basically don't align. It makes fan curves a bit annoying to figure out, but other than that I don't really notice the differences in behavior. 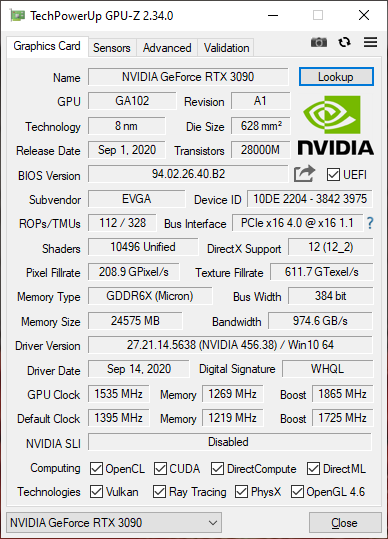 Ran the initial synthetic benchmark numbers:
Time Spy Extreme (4K) [+53%]:
Time Spy [+42%]:
Port Royal [+51%]:
Fire Strike Extreme [+55%]:
So pretty much as expected. It bops the 2080 Ti in everything, but especially at high resolutions and anything to do with ray tracing. When I got the 2080 Ti I was coming from a 1080 Ti and that jump wasn't this high, about 25%. So coming from a 2080 Ti I'm definitely pleased with the uplift. Still not a card I would recommend to everyone at the price point, most people should get a 3080 and a nice monitor for the same price instead....but my VR racing use case makes it 100% worth it for me.
You must log in or register to reply here.
Share: Facebook Twitter Google+ Reddit Pinterest Tumblr Email Link